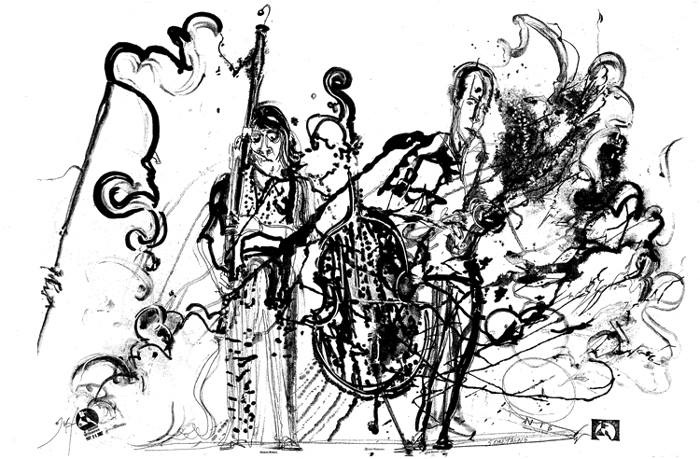 ​Karen Borca is the only Bassoonist who has made a mark in Avant-Garde Jazz and Free Jazz.

Borca studied music at the University of Wisconsin with John Barrows and Arthur Weisberg, graduating in 1971. While at the University of Wisconsin, she met Cecil Taylor, who taught at the university during the 1969/1971 academic years. Borca studied with Taylor, played in his big bands, ensembles, and the Cecil Taylor Unit, and was his assistant while he worked in the Black Music Program at Antioch College in Yellow Springs, Ohio. She was an assistant to Taylor's longtime collaborator, saxophonist Jimmy Lyons, while he was artist-in-residence at Bennington College in Bennington, Vermont in 1974. Borca married  Mr Lyons and played with his ensemble until he died in 1986.

​Her bands have played The Berlin Jazz Festival, Taklos Festival in Switzerland, Jazz Happening in Finland, The Vision Festivals in USA and many other concerts, clubs and venues. Her Quartet and 10 peice ensemble "Tentet" played in the Newport Jazz Salute to Women in Jazz Festivals-New York in '78 & '79. She was a representative of the US as a member of Canaille, an international group of women composers, which played at the Gulhbenkian Art Center in Lisbon, Potugal in 1990.

She has played and recorded with some of the most important pioneers of Avant-Garde Jazz and Free Jazz including Cecil Taylor, both as a member of his large ensembles and Unit from '70-'89, Jimmy Lyons, for 12 years , Bill Dixon, Andrew Cyrille, William Parker, Paul Murphy and more.

She was an Artist-in-Residence at the Jyderup Accordeontrat in Denmark in Oct of 2016.

More recently on Oct.5, 2019 she performed her compositions/improvisations with her band, the Karen Borca Quartet at Jazz at Atlas in Newburgh, N.Y..  Also on Oct. 24th & 26th 2019, Karen Borca arranged and orchestrated the music of Cecil Taylor for the Karen Borca Big Band.  She rehearsed the group and conducted a performance of Mr Taylor’s music with that group for the conference Unit Structures-The Art of Cecil Taylor in New York City.

​Sites with more information about Karen

Karen will join Dave Sewelson on Dec 26,2020 from 2-4 and that live stream will remain on the site going forward.